Tim: ``It's an honour to support and learn from my gig buddy Robert. To anyone thinking of being a volunteer - it's a life changer! You will get a great insight into a whole new world, meet amazing people and bring a bit of happiness and joy to the person you are matched with. I love it!”

Tim and Robert have been paired up for 4 years in 2020! It all began with Tim reading an article about Gig Buddies in his local paper, which he thought sounded interesting and decided to investigate further.

Tim applied and “after a training day and lots of helpful guidance and support, I was buddied up with Robert. He lives in Eastbourne and is in his mid-40s. Robert always refers to me as ‘young man’. He knows I am in my late 50’s, but still likes to use the phrase. I am happy to take compliments whenever I can, and quite like being addressed as ‘young man.’ After all, you’re as old as you feel!”

Robert has a number of barriers to face when going out which Tim needs to support him with as he is a wheelchair user and blind. However this does not stop Robert wanting to go out and have an active social life. He has views on a number of issues and is confident to speak his mind. If he is not happy about something, he will share it with me.” Tim and Robert have an honest, fun, and caring relationship having been Gig Buddies for so long and are great fun to have on a Gig Buddies social! 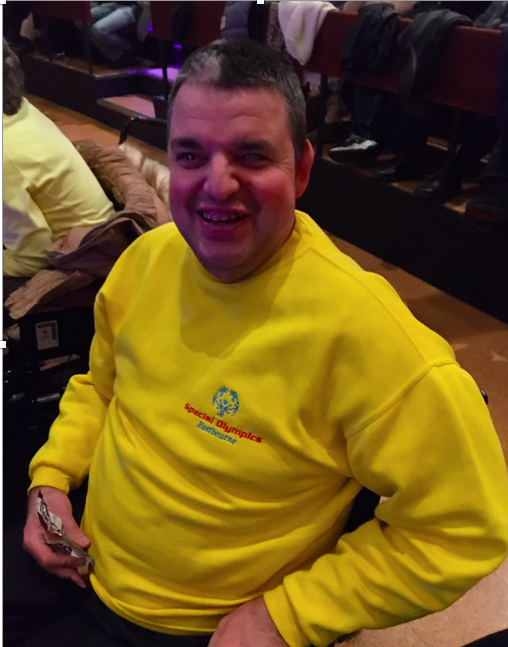 Robert lives in a supported flat and gets on very well with his next-door-neighbour, also called Tim. This can become challenging when we all go out together and Robert wants to chat to one of the Tims. We have some amusing conversations, as both Tims try to answer Robert’s questions. He gets two different perspectives on his questions, so that keeps him on his toes.

Robert’s favourite outing is to The Blue Camel Club in Brighton. It is a DJ and live music night put on for people with a learning disability. And although the Gig Buddy ethos is to participate in all types of events and not focus on specialist gigs aimed at people with a learning disability, Robert absolutely loves our trips to the Blue Camel Club because being blind and a wheelchair user, he feels confident in the inclusiveness of the event and its access. Tim (the neighbour) often comes with us, but we have to check he has enough money. Tim has a part-time job in a pizza restaurant, but it’s tough making the money last the whole week.

Robert also likes going to the Eastbourne theatres to see live bands, musicals and the pantomime at Christmas. The theatre staff are very good and always look after us.

On a Wednesday night, Robert likes to go to the Open Mic night at Printers’ Playhouse in Eastbourne. “This is a great evening when anybody can turn up and grab the mic. You’re never quite sure who will be there. Gig Buddies sometimes organises socials there, which are well supported and great fun. There are two slight draw-backs with the venue – there’s a small step to negotiate at the main entrance, which usually sees me bumping Robert into the door; and there’s no ground floor toilet, so we have to gate-crash another pub or restaurant to answer a call of nature!” However both Tim and Robert often decide to go there despite the challenges as the atmosphere is worth it!

Robert loves to sing and has a loud voice. He tells me he is the loudest singer in his church. When we went to the pantomime last Christmas, even the actors on stage could hear him. He certainly gets the audiences in the right mood. “Behind you!” He shouts at the top of his voice.

Robert joined The Wise Owls advisory group, run by Stay Up Late for East Sussex gig buddies. It aims to empower the people it supports and give them a voice. We meet up every couple of months and discuss an eclectic mix of topics.  Fascinating and fun.

Finally, as I write this during lockdown, Robert is being sensible and self-isolating, as the Coronavirus disease spreads around the world. He finds the days rather long and wishes he could meet up with his friends. He is very much looking forward to getting out again, but for the moment is staying put. He now has the joy of talking to Alexa in his lounge and me on the phone. Alexa can tell him the time and what the weather is doing. I can update him on the spread of the virus and any other news.

To anybody thinking about becoming a Gig Buddy Volunteer, it’s a life-changer. You will get a great insight into a whole new world, meet amazing people and bring a bit of happiness and joy to the person you are matched with. I love it!”