Want to find out about other Gig Buddies Projects?

The Gig Buddies community is growing and we’ve now got partner projects in these locations:

If you want to set up a Gig Buddies project in your part of the world do read on and you can find out more about how this will work for you.

Gig Buddies was started by the charity Stay Up Late, in Sussex, UK. Because of the success of the project, it is now a social franchise. We’re calling this project ‘Gig Buddies in a Box‘ and we’re currently working with a number of partners to get Gig Buddies going in other parts of the UK (and possibly other countries) throughout 2016.

We’ve created a website to explain how this works more and ‘What’s in the box!’ 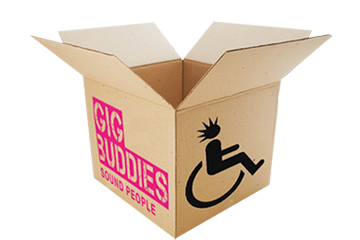 What’s most important to us is that wherever the project is replicated it sticks to these core principles:

Those are the things that can’t change with the project but it will look different in every part of the country so if you’re up for being part of the growing community of buddies do get in touch.

Find out more about Gig Buddies in a box here

Gig Buddies in a box

Map of all the Gig Buddies projects (click pins for links)