Storm, Thunder and the Snooty Fox!

It had been a while since Gig Buddies had ventured to Mid Sussex for a Social, so when we organised a Beer and Burger evening at the Snooty Fox in Three Bridges we weren’t quite sure what expect – or whether anyone would show up. We need not have worried! 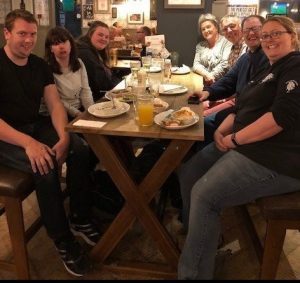 As it turned out, we were joined by two pairs of gig buddies; David & Mark and Laura & Claire, plus Mark who travelled up from Horsham. Gig Buddy Assistant Victoria came up from Bognor to lend a hand. West Sussex coordinator Malcolm plus Kerry, a special guest from Aldingbourne Trust, completed the group.

It was particularly pleasing to see so many make it as they’d had to cope with gale force winds and torrential rain to get there.

David and Mark were on their second night out as they have just recently been matched, so it was interesting for them to meet Laura and Claire who are a well established Gig Buddy pair.

Victoria commented on how nice it was to see David and Mark out having such a great time as she had been involved in the recruitment, training and matching process. She said ‘I love it when people get together and we hear the amazing stories about what they’ve been up to. It makes it all worthwhile’.

It was a lively night in the pub as it just so happened we’d chosen to go there when they were showing a Chelsea v Liverpool cup final on the big screen. The gig buddies were fairly evenly divided between the reds and blues and we just about made ourselves heard above the shouting of the competing fans.

The evening turned out to be a great success and everyone reported having had a good time. More importantly they were all keen to do something again in the future. One of the most satisfying aspects of the evening was that anyone taking the trouble to look our way would have been completely unaware that for many in the group this was the first time they’d met. The jokes and conversation flowed as though we’d all known each other for years.

The ingredients for such a great evening were pretty simple. Good company, nice food, a pleasant (if noisy) atmosphere, good conversation and lots of smiles and laughter. Things that everyone should have a right to take for granted!

Of course, we know that for many in our community these things cannot be taken for granted. So, until that changes, we’ll carry on fighting for the right to ‘Stay Up Late – and have some fun!’