This year we are celebrating a whole 10 years of Stay Up Late! As part of this we decided to have a rebrand of the charity and create new logos for Stay Up Late and Gig Buddies. With the help of our amazing advisory group Storm and Thunder, we worked with the graphic designer Gary Pleece to design the new logos.

We had various zooms with Gary to discuss ideas, colours, positioning, wording and images. Once the logo had been made, Storm and Thunder met up for their first in person meeting since the lockdown to reveal the brand new logos! Here is an interview with Storm and Thunders Chair, Chris Love after the meeting.

Could you tell us a bit about what Storm and Thunder group is?

Chris: Storm and Thunder is an advisory group where we get together and talk about issues and things that are happening in the charity. We also talk about events that are going to be happening.

What is your role in the group?

Chris: I have been part of Storm and Thunder for a long time now. I am the Chairman. I like meeting with the group a lot.

When Storm and Thunder met in Hove park what did you talk about?

Lowri showed us the new logo for Stay Up Late and Gig Buddies for the first time and had a catch up and coffee with everyone. We hadn’t seen each other in a very long time.

How were Storm and Thunder involved in making the new logo?

At the start we did some Zooms with Gary who was designing the logo. He showed us ideas and we told him what we liked and didn’t like. Chloe who is also from Storm and Thunder made her own and it looked good. She drew friends because this is what Gig Buddies is about. Then Lowri showed us the one Gary came up with in Hove Park. 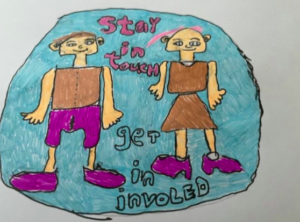 (This design was created by Chloe, a member of the Storm and Thunder)

What do you think of the new logo?

Much better. I really like the background. The new one has good colours and I think it looks brighter so people can read it better. It fits in with the charity.

Did you discuss anything else in the meeting?

We talked about the Stay Up Late 10 year anniversary and some ideas on what we should do. I want to do some music and Djing!

Big thanks to Chris Love for the great interview! 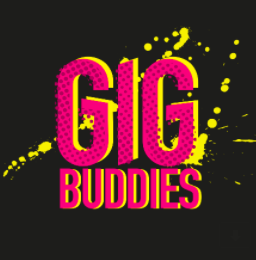 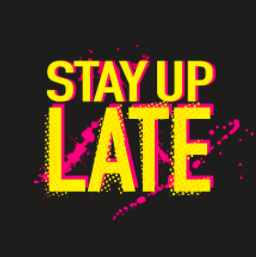