Last week the some East Sussex Gig Buddies went to Bill’s Restaurant for dinner. There were a few new faces amongst the crowd and one of those was Tom. I have seen Tom’s name of our database before but this was the first time I had meet him in person.

I got to know a little bit about his family, his interests and his support needs. I also learnt Tom wants to be a writer!

We spoke about how he feels that many people discriminate against people with disabilities because they don’t understand them or their disability. He thinks that it is important to normalise being disabled and in turn de-stigmatise it. Tom said “we all like seeing friends, eating nice food and having a laugh – maybe I should write about that” . He hopes to de-stigmatise disabilities through his writing and so, here is a little bit about Tom and the Lewes social – written by Tom.

“I grew up listening to folk music on my parents cassette tapes, records and CDs. Dad also used to play flute and guitar when my brother and I were children.

It fed my interest in drama and eventually led to my ambition to learn to play ‘over the hills and far away’ and ‘the gale’.

I think it was intriguing for my first violin teacher to find a pupil with an ambition to learn to play pieces from favourite films but I have to practice things to death to make a decent job of it.

The results have been beyond my wildest dreams. It is fantastic to play with others and at open mic nights.

I have also learnt that ability and disability are sometimes only as limiting as we make them.

I met up with gig buddies in Lewes for an evening meal. I thought it might be a bit daunting to meet up with a group I hadn’t meet before butIt was really relaxing and enjoyable.

There were only 9 of us so, it was a nice small group. Harri had booked a big table that we all sat around.

It was nice to meet Harri, Rachel and all the other gig buddies. I will go again!”

If you fancy coming along to a social then please read the bi-monthly newsletter that includes the listings for socials. It can we found on the gig buddies website. 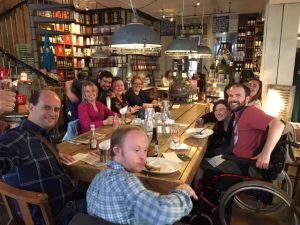