It’s great to see all the accessible performances Brighton Festival has programmed this year and we thought the easiest thing to do would be to put them all in one post so we can share them with you.

They’ve also created this short video explaining what they’ve been doing to try and make performances as accessible as possible: 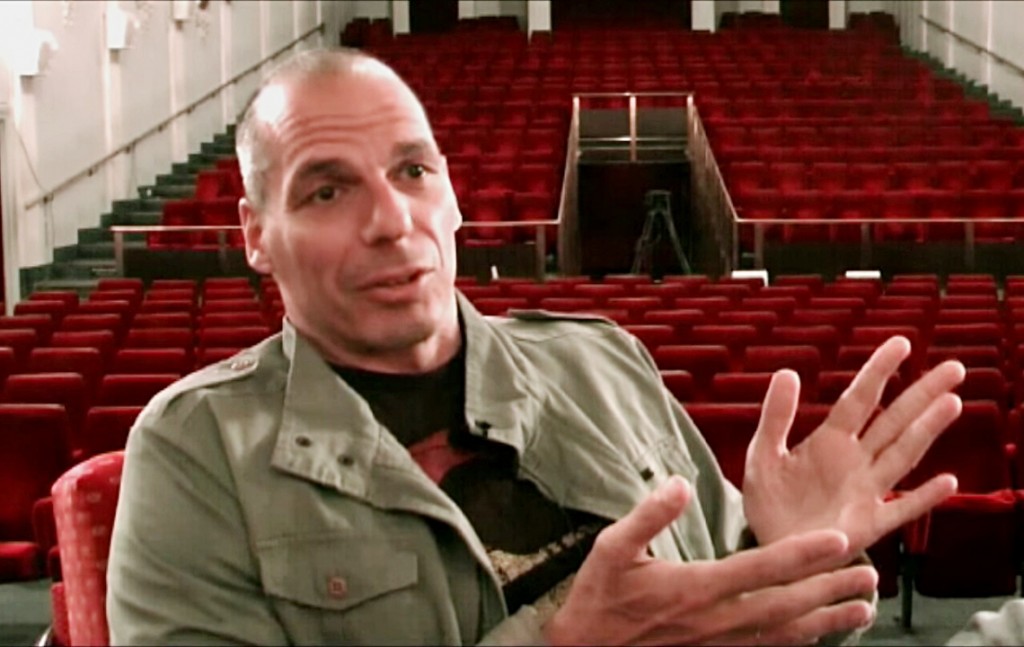 In his new book, And the Weak Suffer What They Must?, former Greek finance minister Yanis Varoufakis assesses the history of the European monetary union. He will talk to Channel 4 economics editor and Guardian columnist Paul Mason about the current crisis and present his case for economic reform. 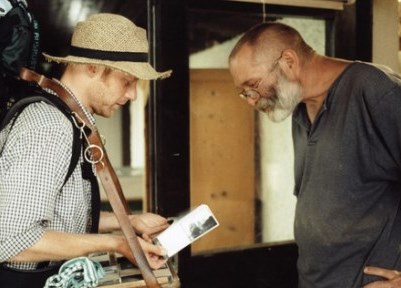 Volker Gerling has walked over 3,500km throughout Germany since 2003, creating flipbook portraits of the people he meets along the way. Using a video camera projected onto a large screen, Gerling will bring to life a selection of his favourite subjects, while sharing the heart-warming stories behind each encounter.

A Weekend Without Walls, Saturday 14th May, 12-5pm

Get ready for a weekend of fun and adventures as Easthill Park and East Brighton Park host five extraordinary new performances. Bring a picnic and the whole family for A Weekend Without Walls… in a park near you. 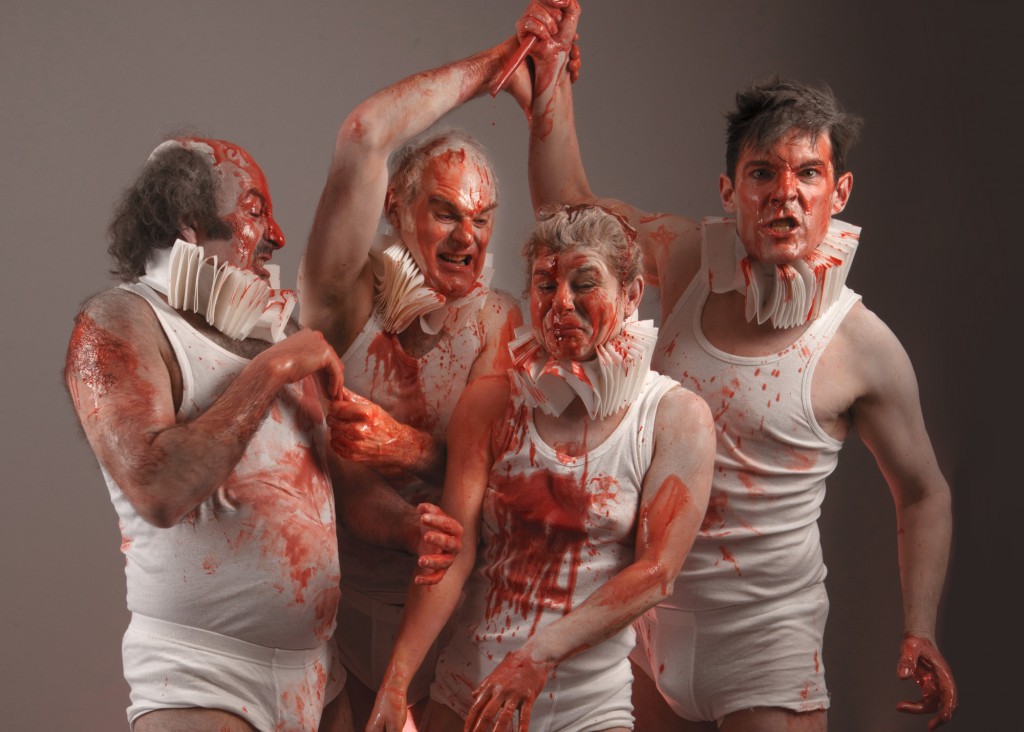 There are 74 onstage deaths in the works of William Shakespeare (75 if you count the black ill-favoured fly killed in Titus Andronicus). Spymonkey will perform them all – sometimes lingeringly, sometimes messily, sometimes movingly, always hysterically.

Can I Start Again Please, Monday 16th May, 8pm 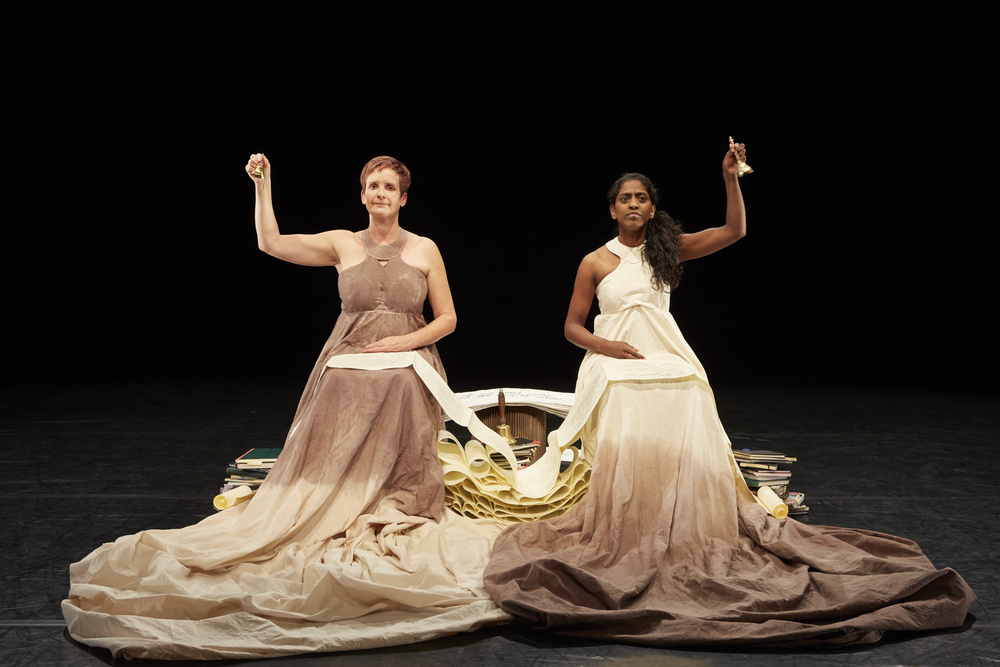 Can I Start Again Please tells parallel narratives in parallel languages (English & British Sign Language) which intersect, diverge & build to create a mesmerising mix of verbal and visual theatre. The piece desiccates and dissects childhood trauma via an exploration of Wittgenstein and semantics. What is being investigated is the power and failings of language – language that tells and hide truths – sparring across the the heard and the unheard, the spoken and the unspoken.

Adapted from Dave Shelton’s award-winning novel and featuring live music and movement, A Boy and a Bear in a Boat is a funny, thoughtful and thrilling voyage to discover the meaning of friendship and adventure.

These highly visual performances may also be of interest 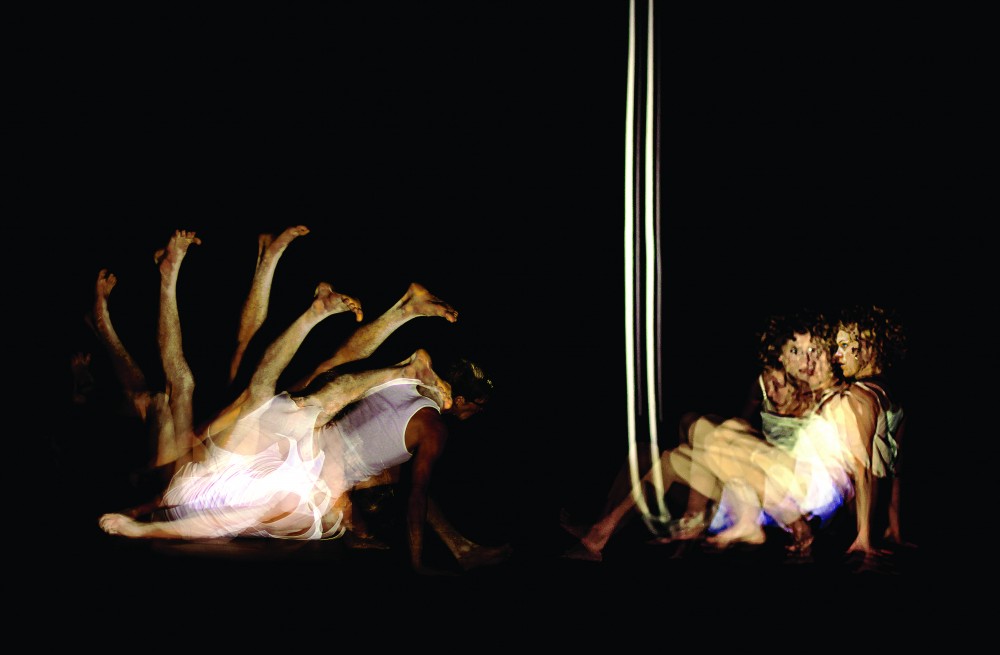 The Ricochet Project is pushing the boundaries of contemporary circus using poetic acrobatics, contemporary dance, contortion and high-flying feats to explore the human condition. Revealing the inner workings of the mind and our search to find a place of realness and connection in an enduring culture of illusion, Smoke and Mirrors is a mesmerising and intimate two-hander for grown-ups. 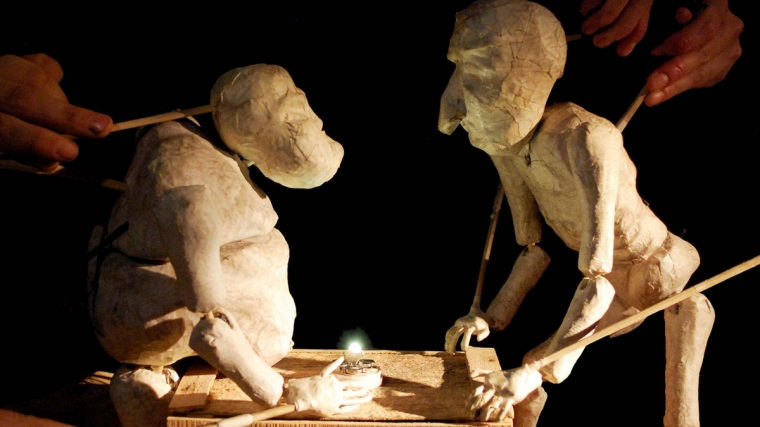 This exquisitely eloquent retelling of a story by the distinguished Chilean author Baldomero Lillo is played out in silence using simple white marionettes. Its emotional and dramatic impact takes puppetry to new levels as Silencio Blanco (White Silence) confronts the black silence of Chile’s mining history. 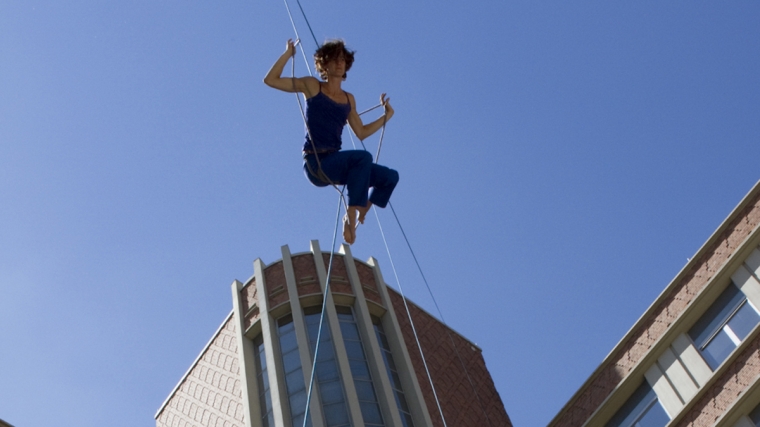 French company Retouramont creates an opening in the dense sprawl of the city – a ‘clairière urbaine’, or urban clearing – for this free outdoor dance performance. Finding outlets for its expressive aerial choreography in the bustle of city streets, its dancers integrate into the architecture and populate the empty spaces between the buildings, monuments and thoroughfares of the urban jungle.

Imagine a world where you can’t progress despite your best efforts to push forward. Multi-award winning Czech company VerTeDance presents a beautifully poignant piece about our lack of freedom and our power to make decisions. (http://brightonfestival.org/event/8149/correction/) 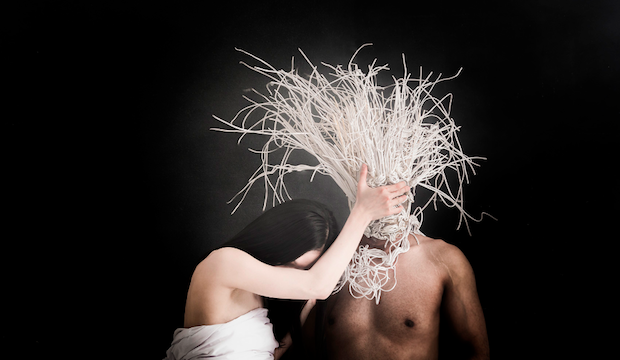 Beautifully combining the classical Indian dance form kathak with contemporary dance, Until the Lions tells the tale of Amba, a princess abducted on her wedding day and stripped of her honour, who invokes the gods to seek revenge. (http://brightonfestival.org/event/8148/akram_khan_company_until_the_lions/)

The following performances are captioned: 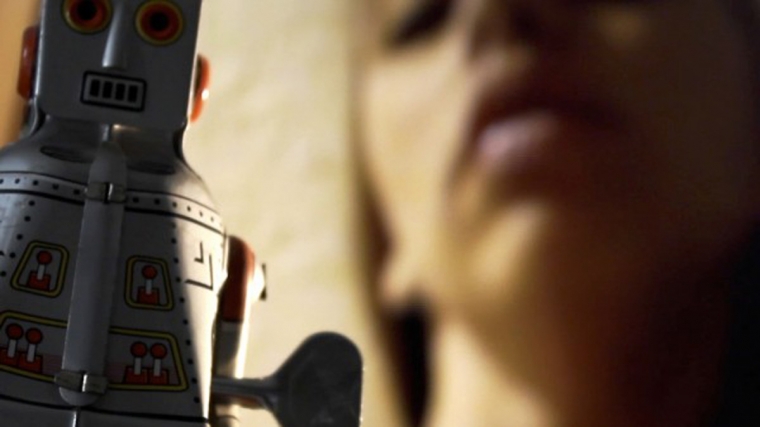 Drop into Brighton Dome throughout the Festival to see three films examining society’s attitudes to real lives: Richard Butchins’s 213 Things About Me, about the traits of a young autistic woman (transcript available); Him, Sheila Hill’s reflection on Tim Barlow’s extraordinary life as a soldier, a deaf man and a Buddhist (audio described & captioned); and Craig Simpson’s It’s Like…, a collaboration with choreographer Janice Parker (audio described). (http://brightonfestival.org/event/8146/unlimited_three_films/) 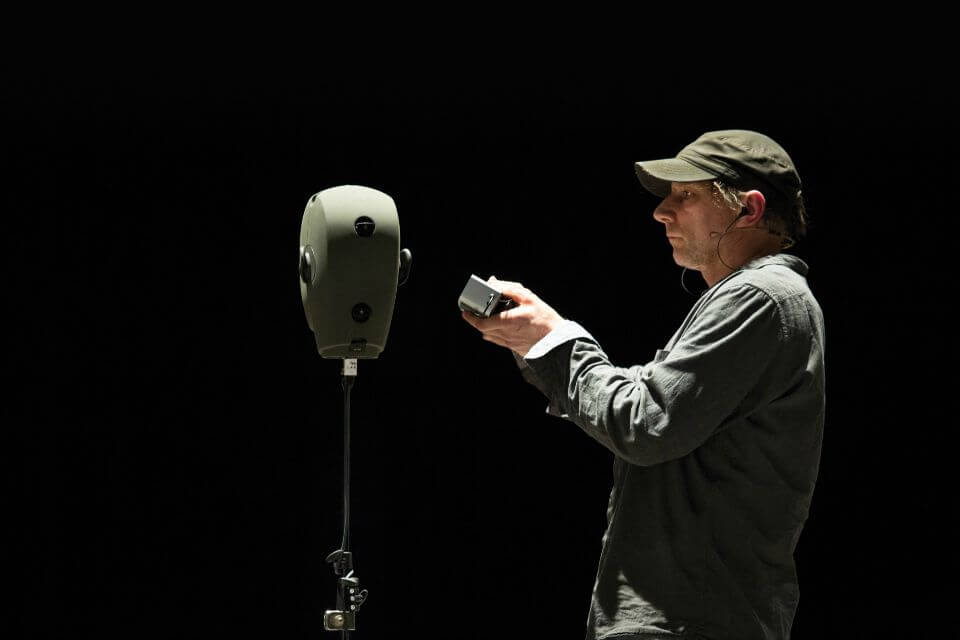 In 1969, Loren McIntyre, a National Geographic photographer, found himself lost among the people of the remote Javari Valley, Brazil. It was an encounter that was to change his life, bringing the limits of human consciousness into startling focus. In this solo performance, Simon McBurney traces McIntyre’s journey into the depths of the Amazon rainforest using binaural technology to build an intimate and shifting world of sound.

The following performances have audio descriptions:

Drop into Brighton Dome throughout the Festival to see three films examining society’s attitudes to real lives: Richard Butchins’s 213 Things About Me, about the traits of a young autistic woman (transcript available); Him, Sheila Hill’s reflection on Tim Barlow’s extraordinary life as a soldier, a deaf man and a Buddhist (audio described & captioned); and Craig Simpson’s It’s Like…, a collaboration with choreographer Janice Parker (audio described).

Our Ladies of Perpetual Succour, Saturday 21st May, 2:30pm

Catholic schoolgirls go wild as the choir trip to Edinburgh goes badly wrong. Funny, sad and raucously rude, this exhilarating cocktail of singing, sex and sambuca finds six girls on the cusp of change. Love, lust, pregnancy and death collide head-on in a single day in this blisteringly funny musical play about losing your virginity and finding yourself.

A touch tour for this performance on the 21st May will be held at 1pm. A Touch Tour is when visually impaired patrons have access to the stage and set before a performance as a way of firming up the descriptive information they may have already received – it provides them with extra detail to allow them to engage with the production.

There are touch tours for other performances during the Festival –

Anatomy of the Piano (for beginners), Sunday 8th May, 1:45pm

Using music, humour and visuals to tell the fascinating story of the piano and some of the great musicians who have transformed what it can do, Will discovers that through music you can go anywhere you want.

Adapted from Dave Shelton’s award-winning novel and featuring live music and movement, A Boy and a Bear in a Boat is a funny, thoughtful and thrilling voyage to discover the meaning of friendship and adventure. 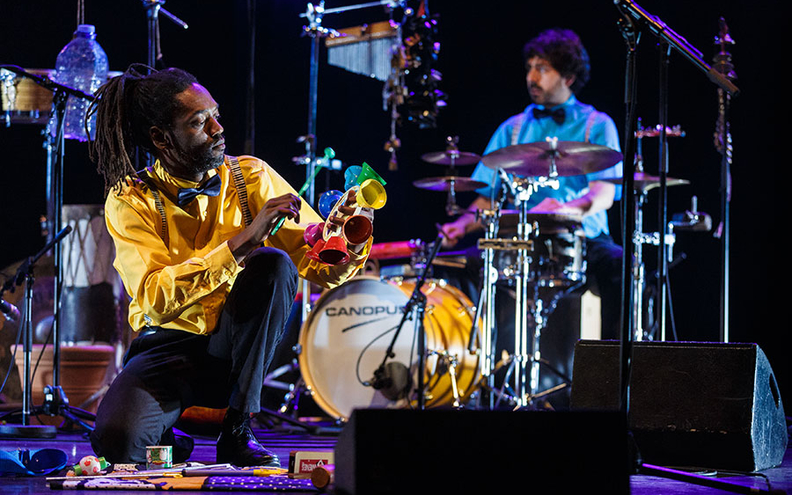 Created by Adriano Adewale, known for his amazing ability to create magical soundscapes from the ordinary and the everyday, this family show is packed full of music from every corner of the globe.

The Two Gentlemen of Verona, Sunday 29th May, 11am

This riotous new production is led by a joyful ensemble of players who will delight with songs, romance and chaos, and hurl Shakespeare’s anarchic comedy into the 21st-century. Remember to bring a picnic and dress for the weather.

To book tickets to all the above shows, events and Touch Tours please call 01273 709709 or email tickets@brightondome.org. If you require the BSL service, please let them know when booking so they can reserve you an appropriate seat.