Graham Sutton tells us 'My three years as a Gig Buddy have taken me to places I’d never even imagined going to and allowed me to meet lots of really nice people who know how to enjoy themselves. If you’re thinking of volunteering then all I can say is 'just do it!'

I first volunteered to be a Gig Buddy nearly three years ago after finding an advert that asked “do you enjoy going to gigs?”. I attended the training day on a beautiful sunny day in 2017 and met many more people who enjoyed going to gigs who were prospective Gig Buddies like me.

Just a couple of weeks later I was invited to meet Jim. Although he is a couple of decades younger than me we have similar tastes in music, films and comedy. We both agreed the pairing was good and planned another meeting to arrange a night out at a gig.

We started locally at The Concorde 2 in Brighton but we were soon going to Worthing, Eastbourne and even up to London (three times now). In between these gigs we meet up at Lewes social nights where we can discuss our nights out with other Gig Buddies and learn where they go too.

This is Jim on the disabled platform in Hyde Park where we saw Santana and Eric Clapton. 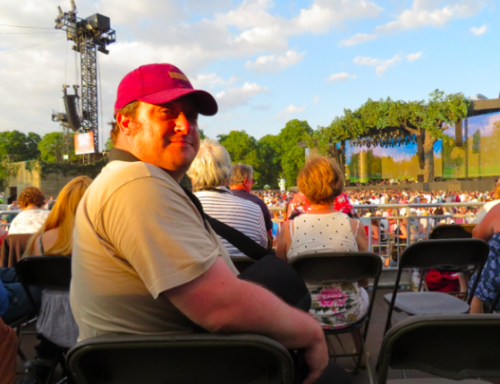 After a successful first year I was asked if I would be happy to go out with another Gig Buddy. I thought it was a great idea and soon I was introduced to Tim. Again we had a similar taste in music but not always the same as Jim. I now find myself taking Tim to pop or dance shows (Abba Fever and Thriller) and Jim to rock shows (Bryan Adams and Queen Extravaganza). Occasionally something comes along that we all love so I pick them both up. Our next show will be Rumours of Fleetwood Mac in Eastbourne. Who doesn’t love Fleetwood Mac?

I learned that Jim loved football and when I saw an advert on Facebook for Limitless FC I asked Jim if he might be interested as they play walking football which is a more leisurely pace than normal football. This suited me too as I’m over 50. We attended practice nights on Mondays and have now completed a full season of monthly Sunday afternoon matches. Jim now feels like a valued member of a team and has made more friends but the icing on the cake was when we won the League trophy. We are both so proud of our achievements.

Graham and Jim at a Sussex Disability Football League Match with another volunteer gig buddy Pete! 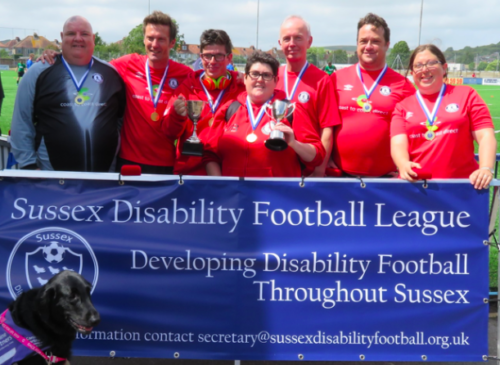 My three years as a Gig Buddy have taken me to places I’d never even imagined going to and allowed me to meet lots of really nice people who know how to enjoy themselves. If you’re thinking of volunteering then all I can say is “just do it”. We might meet you at the next social.