Going to a festival. A gig buddies holiday?

Today I am talking to Victoria about our recent trip to a small local camping festival.

Every year we go to a local campsite to have a practice run at pitching our tents, sleeping away from home. It is a great way to get to know each other and we try to create a festival atmosphere to make it as close to the real things as we can.

This year we were lucky because one of our wonderful volunteers, Jay, was running his very own local music festival in the woods! This was the perfect opportunity to relieve any anxieties within the group about putting up their tent and camping outdoors whilst not being too far from home. 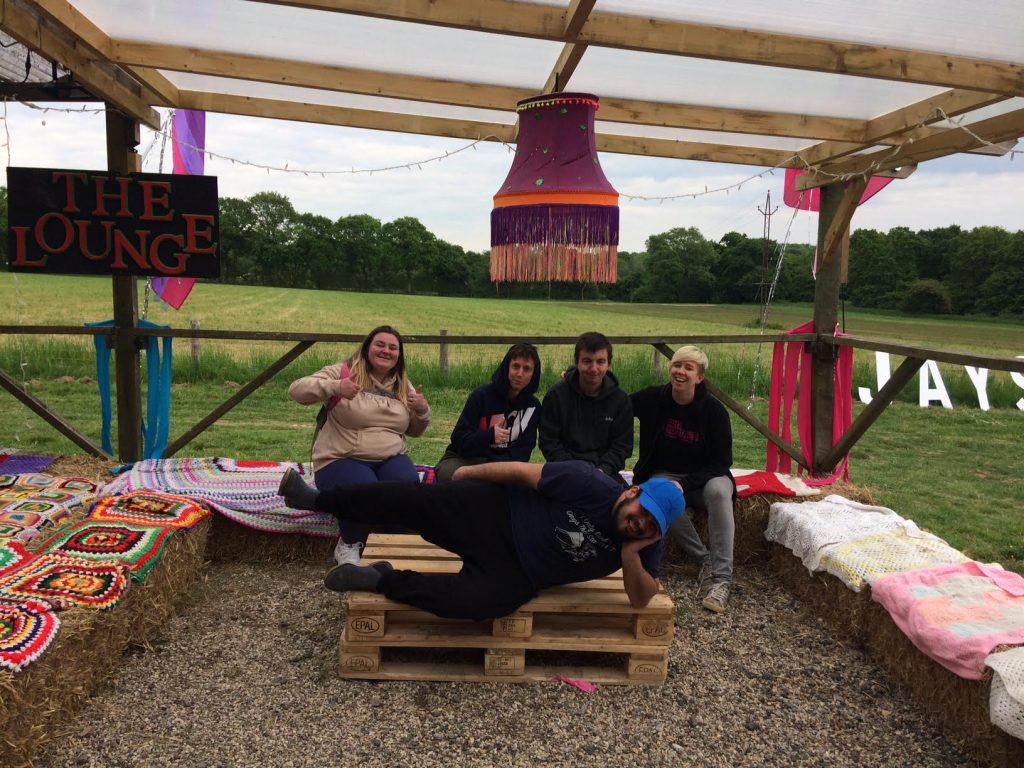 We supported Victoria and Jason to come camping, they are both members of our team, who also happen to be in a relationship. They were telling us about the barriers preventing lots of people with learning disabilities from being able to go on holiday together.

Victoria, could you tell me a little bit about what it would take for you and Jason to be able to go on holiday together? And what are the barriers that stop people being able to go away?

Victoria: Well, for starters, it would cost me around £2000 for seven days to go on holiday with my support workers. You need to pay for your support workers travel, accommodation and food. So it becomes too much money. And that doesn’t even include how much Jason’s support would cost.

Kate: Having been a support worker myself for many years including supporting someone on holiday several times I also understand it from the support workers point of view and we know it is not their fault. You need to eat and have somewhere to sleep, and in other jobs wouldn’t be expected to pay for your own travel –I’m sure all support workers want to enable the person they support to be able to go on holiday and try new things but like me they wouldn’t want their expenses coming out of the pocket of the person they support.

So what gig buddies decided to do was to make festivals, the gig buddies answer to a holiday.

The way that it works is we choose a local festival that we can drive to. We buy all our own food and we make sure it’s healthy, all vegetarian and it’s low cost. People bring their own drinks and camping gear but we lend people stuff if they need it. Our staff team do it as part of their core hours and we provide the additional support hours by taking volunteers, because gig buddies is all about volunteers choosing to do something they already enjoy doing. So if you love festivals and camping why not support someone else to be able to give it a go?

So for Jason and Victoria, it cost them £25 each for their ticket to the festival, petrol, and food.

Victoria, can you tell me how it felt to go away to a festival with Jason for £25?

Victoria – Amazing! Couples goal met! It was really exciting to go camping for the first time together because it was really remote – there was no signal on your phone which was nice because it was more about getting to know people. We had support from the gig buddies team, but there were no rules about what time to go to bed!

Jason cooked us all a noodle stir fry with tofu which I have never had before, it inspired me to eat more vegan stuff. And made me feel like maybe next year I will be ready to camp for longer. It is good to build up to it slowly as one of my goals is to socialise with people more.

Kate: You know what you did really well? If you needed five minutes, you said I’m just going to go on my own for five minutes. And that’s completely understandable. And I think it’s important for people to know that at festivals, there are places where you can go and sit quietly, you don’t have to be with the group all the time because lots of people find groups overwhelming, especially if you’ve got a learning disability or autism, some people just need time on their own.

Kate: What was the highlight of the trip?

Victoria: Jason doing the splits on the dance floor in a onesie has to be the funniest thing I have ever seen!

Kate: I agree. That’s a great way to end. Thank you, Victoria.

Jason is coming to Glastonbury next week with Gig Buddies so see how he gets on in our next blog!